Posting this epic tale in hopes it helps someone else, and to keep track of what equipment I have installed.

It has been almost a year since I put up the HDTV dish, never got around to upgrading the receivers till now.  One of the SDTV TiVo's started having a lot of picture and sound break up on some channels it was time to make the plunge and upgrade to HDTV.

I described installing the dish in this previous post.
http://blog.workingsi.com/2011/10/installing-directv-5lnb-dish.html

The reader might ask, why not just call DirecTV and say "make it work".   Basically besides having aftermarket upgraded DVR boxes with big disk drives, I have my own cabling through my attic and basement, and don't want a tech messing with it.  Plus this stuff is just too much fun to let somebody else do.  I believe it is possible to get DirecTV to just send you some of the bits and bobs needed and save yourself some $$.

OK, mostly this was because it was my wife's SDTV TiVo that was failing that made it critical.  In the past, when this begins to happen it usually means a tuner is failing.   She had a highly upgraded box, a Philips DSR708 DirecTV Receiver TiVo DVR with a TB+ of disk space that I had already replaced once for the same problem and I didn't want to replace it with another 5 year old used unit.   You can get these off ebay for <$40, but it was time to move on.

The dish I put up is a NON-SWM, four output slimline 5 LNB dish with a built in 4 way multiswitch.   This is technically obsolete, Directv has moved on to installing the SWM dishes.  They cost a lot more and allow you to only drop one cable to each box.  However I already have two cables pulled throughout my house, plus the new dishes require a power supply if you want to use them with the older SDTV boxes.  I have several legacy SD boxes in the house that are staying for now.  So that's why I used the older style 5 LNB slimline.

Directv finally released the HDTV TiVo  THR22 in Jan 2012.  This retains the TiVo menu system but does HD.  I must say after using it a week or two I really like it.  It is just like the old TiVo system that does what I want when I want.
http://www.weaknees.com/hd-tivo-directv-thr22.php
http://www.directv.com/DTVAPP/content/technology/tivo_receiver

Ha ha. Maybe satellite TV is already obsolete, since internet TV is going to replace all this stuff.  Truth be known we are already watching lots of Netflix, Amazon Prime.  But I don't like paying by the show to watch TV.

I bought the upgraded unit from weaknees for the added capacity, we are used to lots of disk space.  Kinda pricey I admit.   I was also concerned about activating the modified Weaknees unit on Directv, but they are a n authorized dealer.

I also bought two BBand converters for too much money.
http://www.weaknees.com/directv-b-band-converter-sup-2400.php
Later I see you can find these on ebay and Amazon,   I was in a hurry.
I got Rev 3 DirecTV B Band Converter SUP 2400, which I hear are better than earlier versions.  Make sure you get that one, pay attention to the Rev number. There are Rev 1 and 2 out there for sale on Ebay.

Plugged the THR22 in, with the BBand converters, and I get no hdtv signals, no signal on 119, 103, or 99 satellites.  I swear 119 was there when I aligned it last year. Tried the old SD receiver.  No 119 either.  I'm using the receiver signal meter for all these steps.  I never got around to buying a standalone satellite signal meter.   Plenty of signal on 101 so I decided to forge ahead and activate the box.

I was able to activate it just fine, with zero problems by calling DirecTV.  Had to pay $10 a month more for the HD service, I was already paying for the TiVo DVRs.   The new box probably comes up as leased.  Oh well.  I'm not planning on reselling the box later so it really makes no difference to me.  I couldn't do this online because I had ordered it from Weaknees, but via phone it was OK.  Gave them the RID and card ID.

Still no HDTV signal.  I tried to re-align the dish in the dark.  No improvement.  A little signal on 99c at best.  TV says searching for signal on all the HDTV stations.   Fail.  The next day in daylight I decided to remount and level the dish, it was off vertical, thinking that was why I couldn't get any signal.  I followed the alignment procedure exactly.  http://manuals.solidsignal.com/Slimline_Dish_Installation_Manual.pdf  Still nothing on 99, 103 or 119.   Fail.

I learned that my multiswitch (Terk 3x4) doesn't pass the Ka band HDTV.  So that might be the problem.

I bypassed the multiswitch temporarily and ordered a new one from Amazon that is compatible with HDTV. The Zinwell unpowered 6x8 Multiswitch MS6X8WB-Z


For some reason Weaknees wanted $79 for this, and it was $20 including shipping on Amazon.  Go figure.  This time I bought it off Amazon for $20.

Took the receiver outside and plugged it in directly to the dish.  No multiswitch at all.  Note that I do have the Bband converters installed.  Same result.  Nothing.  I'm really confused.  Spent and hour tweaking the dish.  No signal.  I drag out the old SD receiver and plug it direct to the dish.  No 119 on this one either.  I align until I'm blue and nothing.   It's not the receiver, its not the multiswitch, it's not the cable.  I can't believe it's my alignment, it's dead nuts on.   Fail parade continues.

No other conclusion than the LNB is bad.  Hard to believe, but there is no other conclusion.  I bought it used on Ebay, maybe it was a dud somebody pawned off on me.  All I need is the LNB, not a whole new dish.  So I bought a new Rev 2 5LNB.  The one I had was Rev 1.    They look a bit different, the Rev 2 has clear LNB covers, the Rev 1 has solid white covers.  The Rev 2 has more lumps.   There is a label on it telling you the rev.  Make note that it has four outputs and is cheaper than the SWM version, which will only have one COAX output.   I bought it new on Amazon for $61.94 including shipping.   I didn't want to mess with another used one after all this.

New LNB came.  I climbed up and connected it.  Bingo!  99 and 103 birds came in loud and clear without moving alignment.  So the old 5LNB WAS BAD!!  Hard to believe.  Still no signal on 119.  Rotated the dish, tweaked, no 119.  Whaaa?  However I connected the receiver and now I'm getting "Channel not purchased, call extension 721" on all the HDTV stations instead of searching for signal.  Seems none of the channels I get are even on 119 so I've decided to leave it be.   I finally just peak the 99 and 103 and forget about the 119.   Hooked back up the new multiswitch to send HD to all the boxes in the house.   No problems, signal levels still look good.   Win!

Called Directv, got passed to tech support.  I tell them I just activated and get this "not purchased, ext 721" message only on the HD channels.  The others are fine.  The tech flails around and in the process resends the authorization codes to my box, and <insert happy dance here> the HDTV channels pop up.  What must have happened is that the HD birds weren't visible at the time it was first activated, so it didn't get the message.  Either that or the original tech activated it, then added HD service.  Who knows.   Turns out you can resend the authorization yourself from the online account management page.  So you can avoid calling if this happens to you.

Along the way bought some RG6 patch cables from Monoprice.   They are so cheap they beat buying cable and connectors and making them yourself.
http://www.monoprice.com/products/product.asp?c_id=102&cp_id=10216&cs_id=1021603&p_id=3031&seq=1&format=2
I also have some 125 foot runs, with some short sections of RG59, that came with the house, and it works fine.   HDTV spoils the family, and they will soon ask for me to upgrade the rest of the units.  Win or Fail?

Posted by siliconfish at 5:06 PM 0 comments

Bought an Atmel AVR programmer from Digikey.  I'm working on a project where I need to be able to directly program the Microcontroller in situ that is embedded in a project.   In the past I've always used the Arduino IDE and USB programming, but the developer of this machine is using WinAVR and the ISP setting.  This post is just my notes on how to set it up.

This is what I bought:

WinAVR and Eclipse was recommended to me over the Atmel provided suite.  Since I use eclipse for Java programing, I'm game.

Double click on win avr install.   Run it from start menu.  Something comes up.  No idea what to do with it.

Opened the AVR plugin I previously unzipeed and downloaded from here:
http://sourceforge.net/projects/avr-eclipse/files/latest/download

It says:
If the installation was successful you should see the entries AVR Cross Target Application and AVR Cross Target Static Library in the "New C Project" wizard.
Turns out you have to go one click into creating the C project before you see these choices.  On the first project creation you just see C project.  Pick it and the next screen you see the AVR options.
AVR->Upload to target device is also now on the menu across the top 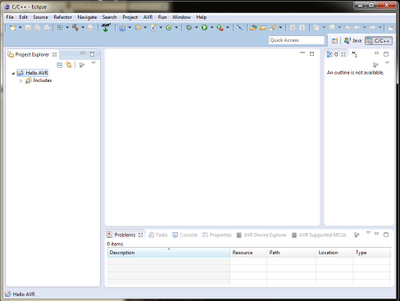 I'll publish my notes at this point, and update the post again when I've succeeded in programming the AVR


Without using all this software, I tried using the AVR ISP Mk2 to program an Arduino, using the supplied Arduino software, version 1.0.

It worked perfectly.     You hook up the MK2 via usb,  hook the 6 pin connector to the Arduino ISP header.  Leave the USB off the Arduiono.   The bump on the ISP header goes towards the inside of the Arduino board.  Power the Arduino from an external 12V supply since it can't get power from the USB.     You hit shift before clicking on the upload button and the function changes to upload from programmer.  There are also menu buttons to do it in the pulldowns, as well as an options menu to pick which programmer you have.    Now that you are set up this way, you can also reburn the bootloader as well as program sketches a little faster than the USB method.  This is no harder than the USB method.

I had to install drivers for the MK2, which turned out to be nothing more than the standard libusb0.dll file.

I was able to rescue two old Arduino boards that wouldn't talk to the USB by reburning their bootloaders.  This worked on an Uno and an older Duelmanove.


Posted by siliconfish at 4:54 PM 1 comments