This is the SVG for a little graphic with some letters and a square I made.

The task at hand now is to make a little graphics sub module for the Java control program to read in an SVG file, interpret the commands line by line and render it.  I'll both draw it on the screen in Java as a dry run, and format and send the move commands at the same time to the Arduinos controlling stepper motors.


The major pieces are
-Open and read in svg files
-Parse them line by line to pull out the graphics commands
-Draw the vectors/curves on the screen
-Write out the CNC machine commands to the serial interface.  That program is already written but needs to be integrated.

They differ as to whether they have commas, absolute or relative moves, order of arguments, etc.

Played around a bit, and svg-edit seems to make files that gimp renders better.

Wrote the file handling and parsing code in Java, now I need to write the graphics so I can draw a picture on the screen to see what the cnc thinks it's going to draw.  That is the best way to see if I've translated the file properly too.

This took days and days to get right.  Starting with some simple pictures of curves drawn in svg-edit through some vectorized complex pictures I eventually got this to work!  I had some trouble with the relative curve commands and decoding the curve commands and the compound commands.   The code gets over complicated and handling the absolute and relative syntax from the different svg file generators took a while to sort out. 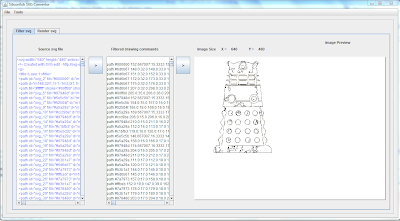 Things I learned:
The command parsing is ugly code, I have to go character by character through the svg commands and interpret them.  A big case statement and while loops flattened out.  uggh.  But it works.

The code at this point is posted at
https://code.google.com/p/arduino-java-xyzcnc/downloads/list

Here is the steps to make a vector image file


I'm finding that svg-edit doesn't like the autotracer.org files if opened directly.  Also svg-edit works better in internet explorer than chrome (where is pretty broken).   If you hit the <svg> button and hand paste the .svg file from autotracer.org into svg-edit, it seems to work.  Not sure what the syntax issue is, something in the headers.

Now to combine it with the CNC control java program...

This is a little graphic with some letters and a square I made.

I need to be able to interpret the Bezier curve commands and calculate the points to drive the Arduino to.


The last one has the code at the end that I ended up starting with.

First I want to make the Java program to compute all the points, and draw them.
Here is the initial implementation of the code at the end of this post 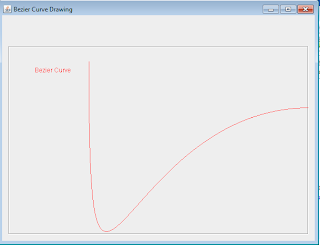 It worked and drew a curve!   Now I need to draw curves with two control points that are entered, and control the number of points in the curve.   Looks like those functions are here. 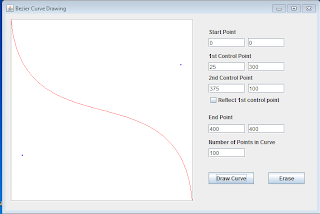 This is the guts of the routine:

That is the basic C function.  Now for the S function. The shorthand curve notation is a bit confusing.
http://stackoverflow.com/questions/5287559/calculating-control-points-for-a-shorthand-smooth-svg-path-bezier-curve

From the SVG spec

I am only doing a cubic curve, and there are quadratic and elliptical types.  Need to see if I need to implement the others or if I can get by with just implementing the Bezier cubic.


Posted by siliconfish at 7:51 PM 7 comments