Scavenging LEDs from a bad investment 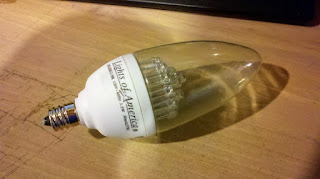 Posting this because I wanted to vent and slander these bulbs, and also because I was surprised by what I found.  This is a Lights of America 2025LEDE12-30K LED Bulb

I had purchased a 3 pack of these bulbs from Costco for $29, less than two years ago for my hall chandelier.  After a few months one burned out.   By today all three had died and I felt totally ripped off.   That is a lot to pay for light bulbs that were supposed to be green and save me money in the long run.   I assumed the LED driver circuits had blown, and not the LED's themselves.   If you read the reviews on Amazon, I'm not alone in my experience with these bulbs.  I found it really hard to find energy efficient chandelier bulbs, the LED bulbs are just not up to the job yet if you want any actual light output.  The CFLs chandelier bulbs are big and clunky, and have other aesthetic issues.   These had a blatantly misleading light output printed on the package.  No wonder Costco doesn't sell them anymore.

You can read the reviews here:


Being a hobbyist I couldn't bear to throw away what looks like cluster of perfectly good bright white LEDs.

So I busted open the bulb and clipped out a couple of the LEDs and tested them. 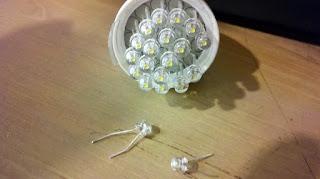 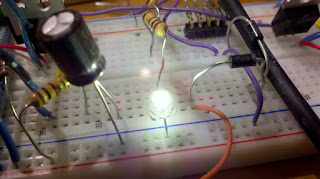 I hooked them up like any other LED, with the flat side as the cathode to ground and 200 ohms resistor to 5V.  My surprise was, that one LED of all I tested didn't work.   Whaaa?  You mean that took down this bulb?  Turns out yes.   But LEDs last forever?  Not if you burn them up they don't.

I busted open the base and was surprised again.  After thinking LED bulbs were high tech, and experimenting with high power LEDs for my infrared plate blocker, I had learned that the way to get the best performance out of these things is to drive them from a PWM current limiter IC with a feedback loop, so that they can be kept near their maximum power without burning out or wasting energy in current limiting resistors.   I was under the mistaken impression that these bulbs, costing near $10 apiece used that technology.  You can see these described   http://para.maxim-ic.com/en/results.mvp?fam=hbled

Here is what I found I had bought with this piece of junk. 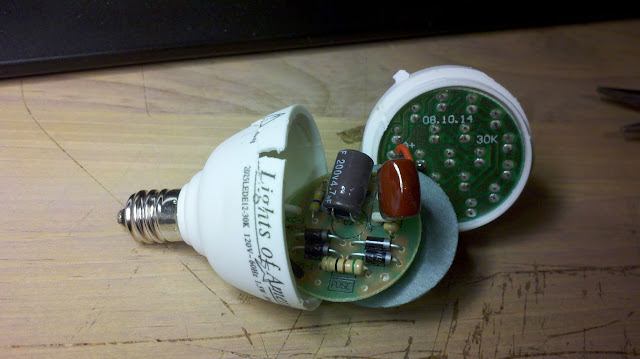 You can see the four diodes of a simple bridge rectifier, with a big cap to filter the resulting DC.   The rest of the circuit is simply a christmas tree light string of 20 LEDs in series.  I measured a 3V forward bias across one of the LEDs.  So 20 * 3V = 60V.   Not coincidentally half the 120V AC supply.  This bulb is no more sophisticated than what a high school-er would design (ok maybe not every high schooler). www.ece.drexel.edu/courses/ECE-E352/lab2.doc is an example.

No wonder you can't dim an LED bulb like this.  As soon as the voltage falls, the Vf of the diodes is not met, and the whole series of bulbs turns off.  If any one of the LEDs burns out, the whole thing stops working.  There is no current protection or voltage control.   The line power is blasted into the forward bias voltage, and whatever current results, is what you get.    The bulb is rated at 1.5W.  I ran the LED at 5V with a 200 ohm resistor, and got 3V forward bias.  So (5V-3V)/200 ohms = 10mA.   10mA * 120V is 1.2W, so at least the power rating is believable.

Enough time wasted on this junk.   Hopefully other manufacturer use a more sophisticated design.  In the end I got 20 (actually 19 working) LEDs for $10 for my parts bin.

Found a whole website later on this topic :)
http://www.candlepowerforums.com/vb/showthread.php?220441-Don-t-buy-Lights-of-America-120V-LED-Bulbs
Posted by siliconfish at 12:56 PM