Debugging and Publishing the Blinker App


For entertainment I decided to publish a real app to the marketplace.  I wanted to see what it was like, if there were any unknown obstacles, and see if anyone used my app.   I started with my hello world blinking LED app and polished it up into something marginally useful to others.   Easiest next step was an app to completely control the LED flashlight, blink, pattern setting, speed setting, strobe light, maybe dimming.   It would be useful as a toy and as an emergency signalling device, a strobe light for video, whatever.  Here was my starting goal list of functionality:


I signed up for the Android market as a developer.  Google "android developer", follow the links and fill out the forms.  Done.  That cost $25. Also signed up for the Amazon market so I can publish to the Kindle.  Signed up for  https://developer.amazon.com/help/faq.html#KindleFire.  Have to watch out, amazon costs $99/year after the first year, so this may not last as a hobby.  The first year is free however.  Amazon is stricter, we will see if my hobby app can get through.  I may use ads just so I can see how that works.  I expect that I'll earn up to $1 based on my experience with the web.   No pipe dreams of wealth with this one.

To publish I felt I had to have an app that was useful, with a clean GUI, and minimal bugs.  I didn't even look to see how many other apps were there that did the same thing, that would be too depressing.   This is a hobby project so I have to let myself get excited by the creation.  Until you have worked something through to the level that others can use it, you don't learn all the lessons.

This turned out to be a trickier app than you might think.  The trouble is, you need processing power to blink the light, but you don't want to tie up the GUI thread with marking time or the phone appears hung.   So I had to learn about child processes and about other events that happen on the phone platform like randomly hitting the home or back keys, screen rotation, keyboard opening, etc that your app and it's child process have to deal with.  Asynctask would run amok if not managed well.

There is a lot of "artwork" to building an app.  You need an icon, button layouts, backgrounds, etc that make it look professional.  I probably spent as much time with this as making the code.

Implemented a GUI, in the process learned how to used radio buttons and toggle switches.   Tossed in the basic blinking functionality and then entered the "development loop" of adding functionality, debugging glitches, crossing off items on the list and adding more items as ideas, issues, etc emerge.

This would be my PCR list if this were done at work.  Since coding is not a spectator sport, I'll not write the running blog for this development as I do with hardware.  For anyone starting out, this is a simple and productive way to work on a complex task.  You make a working list of all the things to do.  Then you pick one and do it.  If anything new comes up while you are working on that task, just add it to the list and don't stress about it.  When you finish a task, mark it done, smile, and pick another task, either easy or hard depending on how much time you have and how deeply you can think at that time.  If you stumble across information for a task while working on another one, don't switch gears, just drop some notes in the list and keep rolling.  Eventually everything on the list is done or you decide you don't need to do it.

Now I'm pretty happy with the app.  It's stable and it does what it is supposed to do.  I can't crash it by pushing buttons on the phone, opening the keyboard, changing settings like crazy, etc.  I'm going to try to push it to the android market now.

Got the versionCode and versionName.  Now the icon.  Wow.  A lot of artwork to do.
http://developer.android.com/guide/practices/ui_guidelines/icon_design_launcher.html#icons_in_market
https://support.google.com/androidmarket/developer/bin/answer.py?hl=en&answer=1078870

You have to make an icon of several different resolutions.  I tried scaling a jpg photo and shapes in GIMP and it didn't work well at all.  At low resolution and on the phone screen it looked really ragged and unprofessional.   I was using GIMP and the image scaling function and saving at the lower resolutions.   Finally I tried a simple drawing with some texture in power point.  Then I scaled the picture in power point and copied it into the GIMP drawing, over and over again for each resolution.  That worked pretty well and it looks good.  On the phone screen it stands out like a little hazard flasher auto button. 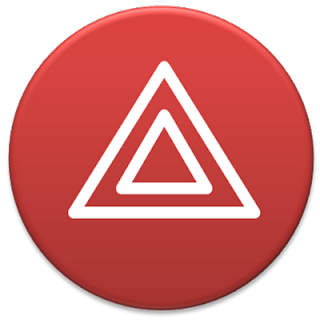 Collected a couple screen shots that are required,  by doing an alt printscreen of the emulator and pasting it into gimp. 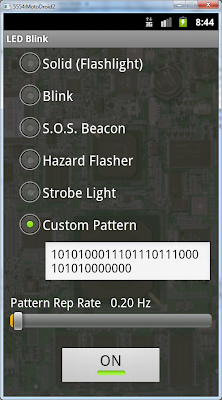 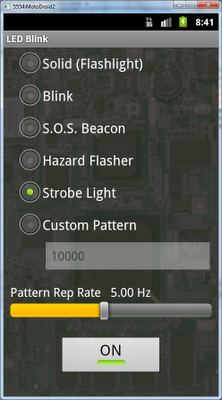 Now to figure out how to sign the app.  Found a couple links
http://developer.android.com/guide/publishing/app-signing.html
http://www.dreamincode.net/forums/topic/131121-android-part-v-signing-and-publishing/
This seems like a weird and mysterious process.

However it looks like Eclipse  File->Export to an android app presents a form to fill out to make the keystore.   I made a separate directory for this since I had no idea what I was supposed to do.   It seemed to work without doing all the command line stuff.

I walked through the android developer upload page.  I had to scale my screenshots with gimp to 480x854 get them accepted.    A bit of fiddling with the pictures and up it went!

Here is a link to my app list, I will try installing it from the market and see if it works.

I published the app and it showed up on a web search the next morning.  I dont know how long it actually took since I went to bed, but it wasn't instant.  Must have been more than an hour.

I cant find the app on the android market from my phone.   When i went to the web link above from my phone, it said my phone WAS NOT COMPATIBLE!  Whaa?  I developed it on that phone.  Something is wrong with my app requirement settings.

I went back to downrev the build of the application to 2.1 in eclipse.  That should cover the vast majority of devices.  Right click on project name, Build Path->Configure Build Path->Android and the list of Project Build Targets shows up.  Change the check mark to a lower rev.  Took a while to dig that out of the GUI, but once I found it, it was easy.

Next I had trouble with the keystore, it refused to export the application again.  It turned out there were some errors in the layout.xml file, the "match_parent" keyword didn't work in Android 2.1 and had to be changed to fill_parent.  Once that was cleared up, i could re-export the app.

Discovered I forgot to update the version number when I went to publish.  Had to export again.   After that I still couldn't see the new rev in the app market.   Turns out I had to activate the new release, and de-activate the old one due to the conflict in Android rev support.

Arrrgh.  Still can't download the app to my phone.  After about an hour, the new rev showed up when doing a web search for the the app.  But I can't see if from the phone and the label says the app is incompatible with my Motorola Droid 2 GLobal.   Whaaa?

Maybe it has something to do with my hardware permissions.  The FLASHLIGHT permission seemed odd, although it works when directly installing.  On the android dev site it seems to be
android.hardware.camera.flash
http://developer.android.com/guide/topics/manifest/uses-feature-element.html
This page showed some different syntax
http://www.linuxforu.com/2011/10/android-app-development-part-5-hardware-and-sensors/

Still going nuts.    Can't get the app to show up on the market as compatible with ANY phones.   This post had some more ideas.   This is something stupid but I don't know what it is yet.
http://stackoverflow.com/questions/5053507/my-android-app-shows-as-this-item-is-not-compatible-with-your-device  After days of fiddling I thought I finally figured out the problem.  It was the  android:screenOrientation="portrait"  line in the manifest http://forums.whirlpool.net.au/archive/1771380.  There is some bug in the compatibility that makes the market think that phones with ONLY portrait mode can use the app.   Lame.   However that STILL didn't get me past the FLASHLIGHT filter.

The only thing i can seem to publish is a version with the FLASHLIGHT permission stripped out.  making the app totally useless.   So I have an app that works great on my phone, but I can't seem to publish it.  FAIL.   I'm going to put this on the back burner and move on to another app, since this ceases to be fun.

Update!!!!! HOoRAYYYYYYY!  W000T!  By giving up for a day and working on something else I thought of something else to try.  Not only did I have a permission line, i had the line in my manifest that says <uses-feature android:name="android.hardware.FLASHLIGHT" />.   I deleted that, to see if the android market added it back in, and it didn't!  Plus the app still works fine.  Now I show on the dev console as being compatible with 945 devices.  Hooray again, i finally can publish the app.

Amazon app store rejected my app, said that the light didn't turn on.   Lies!   However it is on market now.

In the process of looking for my app in the store, I saw that there are probably 1000 apps to do similar tasks.   So many in fact that I have to search for pub:Siliconfish to even find it amongst the clutter.  I didn't see one exactly the same, and the world probably doesn't need this app.  However I had fun, and I learned a lot, so the project is still a success.    On to bigger fish!