This Asus EePC 1005PEG netbook laptop got dropped off a bed onto a tile floor in a dorm.    It is less than a year old so I decided to try to save it.    This model has built in 3G networking, a rarity.

The right half of the screen is a rainbow of vertical lines that never goes away and never changes.  The left half works normally.  Wiggling, bending and opening, closing turning on and off had no effect.  Connecting the laptop to an external monitor it works fine.   So the video card is ok.     Once it was open like this I also wiggled the wire to the screen and pushed and prodded to see if I could see a change, indicating a break somewhere.  Nothing.  The problem is definitely inside the LCD panel.  That is actually good news.  So it looks like it needs a new LCD panel, it is not a broken wire or connector.


Removed the rubber bumps from around the faceplate of the LCD screen, which revealed 6 screws.   Removed them and then pried the face plate off.   Underneath is the LCD screen secured by 6 more screws at the corners.  Easy to remove.   You need a very small philips head for this repair.  I needed some tweezers to hold the small screws, but that is the only tools.

The LCD has this sticker on the back that you can see once it's loose with the part number of the LCD.  It reads hsd100ifw1  Rev 0-A05  HannStar.


There is a ribbon cable that connects it to the rest of the laptop.  I don't know yet how it comes out, but I'll save figuring that out until the new part comes. 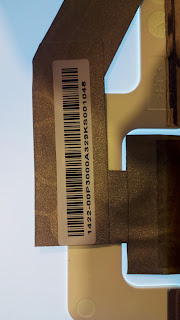 
The part has a revision code, on mine it said A05, and the one I bought said F01.  Hopefully there is not any real difference between revs.  I couldn't find an A05 for sale.

I ended up going with the new one, fulfilled by Amazon shipping, because I thought I'd have a better chance of getting if faster and didn't want to accidentally buy from an overseas vendor masquerading as a US vendor. They will try to ship if from China and sometimes you never get it.  I don't know how the postage works from China, but it happens all the time.

Here it is in the wrapper. 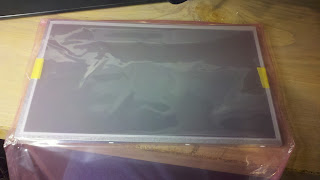 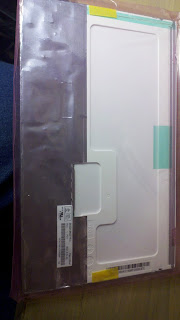 Once I had the new screen, I realized there were some metal brackets on the sides of the screen held by two screens that had to be transferred from the old screen to the new. 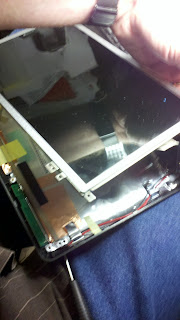 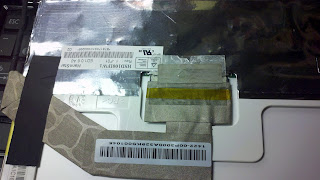 This is the sticker on the new unit.  Note that it says hsd100ifw1  Rev 0-F01.  The rev is different.  Turned out it didn't make any difference. 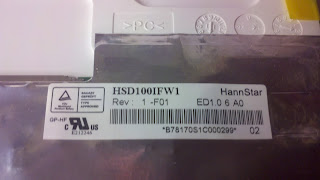 I peeled up the black tape on the left and the clear tape over the end of the ribbon cable.   Once that was done I could pull the ribbon cable straight back and there was a small black connector on the end, the cable pulls right out.


I saved the tape and reapplied to the new unit.  It wasn't hard at all I pushed the ribbon connector into the back of the new LCD screen.   It pushed in easily.  I powered up the PC at this point before re-assembling and Ba DA BING!  It works!

It took me over an hour to put the thing back together again, I had put the metal brackets on upside down, and struggled and struggled to get the new screen to fit in the case and line up the screens.  It took me a while to realize my mistake.  That and a lot of really small screws in awkward places.   Really the most difficult part of this whole repair was reassembling the unit.   But if you are careful and moderately dexterous, you can do it!