Tip for switching video inputs on the hotel TV

This is how to easily bypass this system and watch videos from your laptop on a hotel set.
(If you don't want to read my story, the second picture shows you what to do)

Recently I stayed at an Embassy Suites hotel in Maryland, and they had a nice LG HDTV and an OnCommand remote control with a box on the back labelled OnCommand as well.  I think the system may be built by LodgeNet. 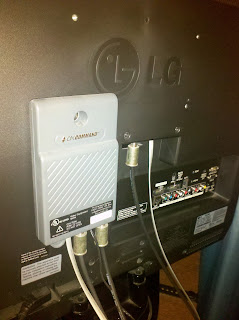 I had brought some DVD's and we wanted to watch a movie using my laptop as the video source and the room HDTV.  That sounds fairly reasonable, right?   Lots of people want to hook up a PS3 video game console, or use streaming movies, netflix, slingbox, and the like and watch video from their own laptop while staying at a hotel.   I should be able to use this HDTV as the monitor, I payed to rent the room!

First I wasted $25 at the neighboring best buy buying an HDMI cable, because I noted that the TV had HDMI connectors on the back and my laptop has an HDMI output.  I could have gone VGA but then I'd have to listen to the sound from the laptop, which is horrible, or have an audio cable plugged into the headphone jack too.  HDMI will also carry sound to the TV.    HDMI cables are a major profit source for Bestbuy because people price shop for the tv and then buy a stupid $50 cable to give them back the profit.   The cheapest they had was $25.  Now high quality cables do make a difference for long runs or marginal equipment, but if you only need a 3 foot cable, a $1.50 cable from monoprice is fine.  I know all about cable bandwidth, speckles and dropped bits, but that is a post for another time.  I should have packed a cable from home, but you can't bring everything.

I get back and I plug the HDMI cable into the TV and laptop and go to switch the input to the AUX or HDMI 1 source.  Whoops, no button on the hotel remote to do that.   I go to the set and push the input button on the side.   Nothing.  It is clearly disabled.   The menu button doesn't work either.  I can't change channels to the new video source either.   Curse you red baron!!!!!!!!   The hotel has lobotomized the TV.  I can sympathize because the hotel doesn't want every new guest calling up that the TV is messed up and all that needs to be done is to change the inputs back to the hotel feed.  So they save a lot of time and headaches with a TV that only tunes to the channels that work.   They also are looking to earn a buck from pay movies too, that is a little less understandable.

At first I thought the solution was to go back to the best buy and get a universal remote so I could push the input/menu buttons.  But I didn't want to spend any more money and the family was getting tired of waiting.   Years ago I used to carry a universal remote on business travel because that was the way to see the blocked channels with the old analog hotel systems. The old time hack was to simply connect the coax cable from the wall directly to the TV (a car key wedged in the metal shield turns it) and bypass the extra hotel box to see the pay per view movies using the universal remote to change channels directly on the TV.  Ahh the old days when technology was so easy to hack.   I'm sure it is not that much harder these days.  I don't want to see their crappy pay per view movies, the laptop has all the video anyone would ever need.

A little googling gave me this
http://boardingarea.com/blogs/traveltechtalk/2008/01/27/hack-the-hotel-tv-watch-what-you-want-on-it/
It has a bunch of suggestions and random information about universal remotes, installer remotes, TV hospitality mode.  It looks like a lot depends on what equipment you are facing.  It definitely isn't worth buying a universal remote until I try some basic unplugging.

The first thing I tried worked!   There is a grey phone line cable that connects from the back of the TV to the parasitic OnCommand box on the back (I saw a similar thing with bugs hanging on your back in star trek and doctor who ).    I simply unclipped the phone cable from the box and let it hang.  Now the input buttons work on the side of the TV and I can change inputs.  TV is unlocked!  Woot!   I plugged in the cable to the HDMI input and laptop and played the movie.  Family hero. 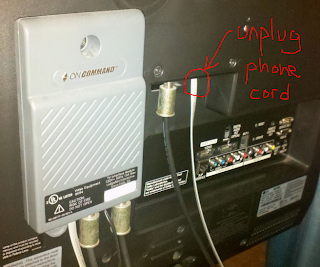 I simply reconnected the grey phone cable when I was done, turned off the set and turned it back on and it was back to hotel normal.  No worries.

Just so you don't miss the hacking fun, on the first try of disconnecting the phone cable, the TV went dead for a minute and wouldn't turn on.  I thought I was going to have to call the front desk and play dumb, but turns out I accidentally knocked the power plug loose turning the TV around.  :-)  Unhooking power and putting it back in fixed the issue.   False alarm.  But as a last resort if things go wonky on you, unplug the TV from the wall and plug it back in after you remove or reconnect the phone cord and all should be right again.  I later confirmed that unplugging the TV from the wall between steps is not necessary to reset the box, I went back and forth several times from locked to unlocked during our stay.

Update... stayed in a Hilton Garden in Texas and it also had an LG TV, but the grey hotel box was hidden down inside a cabinet out of sight.  There was the same grey phone cable plugged into the back of the set, and the input button didn't work.  Simply unplugged the phone cable from the back of the set and I can now change inputs to HDMI using the buttons on the side of the set.  Plugged it back in when I left and it went back to working like a lobotomized hotel TV.