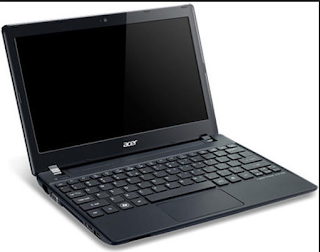 Quick post on a successful laptop fix.  I was in a hurry and didn't take pictures, so this post may be less helpful than average.   However this was an easy fix that anyone with a small screwdriver can do.

This laptop had an intermittent screen.  As the user manipulated the laptop the video would flicker, tear, invert, lose colors, etc.  Problem happened enough that it was really irritating.  Wiggling and re positioning made it work again briefly.   This was not just the backlight turning on and off, the video was being corrupted.  Backlight stayed on the whole time.   There were no obvious cracks or sections of the screen acting differently, so it didn't look like LCD trauma.

I thought the LCD panel was probably cracked internally or the video cable was broken at the hinge, as the video cables usually go through the hinges and this machine had a rough life.   My first thought was I'd being buying a replacement LCD but I was wrong.

To rule out the possibility that the video chip is coming loose/desoldered from the motherboard, I plugged in an external monitor.  Video was fine.  So the motherboard and graphics are working.

First I pried around the screen bezel and it pops right off.  No screws at all.  Four screws hold down the panel.  Flip it over and the video connector is on the back.  Removed and reseated it.  Wiggled and flexed the panel, cable and connector.   There really seemed to be no correlation to wiggling something around the screen, hinges, connector and the screen flickering.   More manipulation and I decided that the loose wire must be the other end of the video cable.   Snapped the screen and bezel back together.

Flipped it over and began removing screws.  Removed the battery. Several screws on the back surface, remove the hard drive cover and there are about 10 more sprinkled around.  You must remove them ALL.  None are hidden, thank goodness.  (actually one is next to the wifi module and was partially under a sticker)  They are little black Philips head.  Once they are all out you can pry around the perimeter and the keyboard and top cover pops off without much resistance.   If you miss one screw, the keyboard and top cover won't come off.  Pry it a bit and you will quickly find the one you missed.  Left the keyboard cable connected and folded top cover out of the way.   Underneath is another video connector like the one on the back of the LCD.   Follow the black wire bundle from the screen to find it.  Unseated and reseated and the problem went away!  W00t!

A bit of finagling and popping to put the cover back on and putting in all the screws. Good as new.
Posted by siliconfish at 10:36 PM