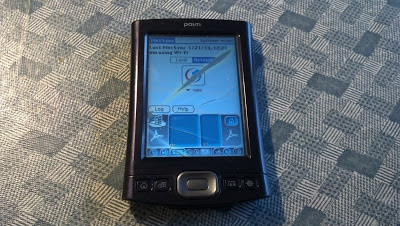 My wife stepped on her Palm TX Handheld and broke the screen.     Since the touchscreen was also cracked, we couldn't push the Sync button to get the recent data off it.  She only syncs this thing about once a year if we are lucky.   Touchscreen didn't work at all and obviously the image had a big crack in the middle.  We could have lived with the crack if the touchscreen had worked.

Too bad my blog is turning into a screen repair forum. But it goes to show that once you do it on one device, it is easy on others. No idea why so much stuff in my house is getting broken. This time is a vintage Palm TX Handheld. My wife clings to this thing, which is probably 6-7 years old.   I've given her an apple touch, an iPhone4S, an Amazon Kindle, but still she uses the Palm TX as the goto PDA for addresses and calendar.  Go figure.   We had to save it.

This time I had an unfair advantage, this was actually her second Palm TX, the first one had died years ago and wouldn't charge.  It probably just has a bad battery or the power connector was worn out.  She had replaced that one before they were museum pieces.  But luckily I had the broken one to scrounge for parts.   I needed to fix the one with the broken screen because that one had recent appointments and addresses on it.

I did find replacement screens for a mere $12.99
Palm TX Parts


There are plenty of videos and blogs out there, so I'll be brief on this one.

You need a knife to pry with (I use a case knife from a watch repair toolkit) and a T5 star bit.  You could probably get by with a tiny Philips head, allen wrench or flat head screwdriver and force it into the screws if you had to.  Some screen repair kits come with one of these bits. 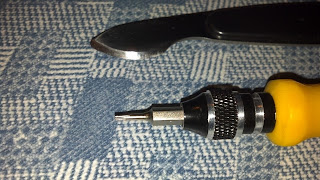 Remove the four screws on the back 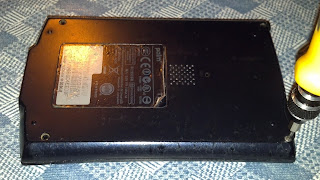 Stick the knife into the two long edges and pry open the crack.  Ignore the breaking sounds, it's fine.   Then do the same along the bottom edge.  Wiggle and pry and the case will come apart. 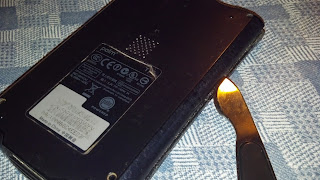 The back comes away, the battery is stuck to the back so peel it off.   Don't lose the little black piece of plastic on the back for the rest switch, or the power switch on the bit of plastic along the top. 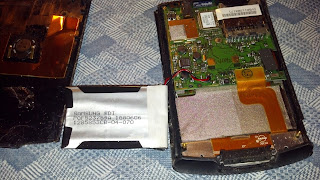 The power switch and top edge is a separate piece that will fall out. 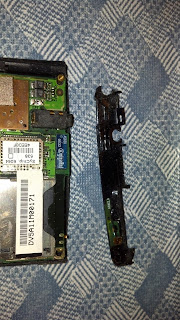 There are two connectors to the motherboard.  The one on the right (shown flipped up) is to the display, the one on the bottom is the keyboard.  Put your fingernail under the edge and then just pop it up.  It presses back together to reconnect.  Remove both connectors. 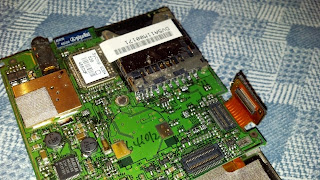 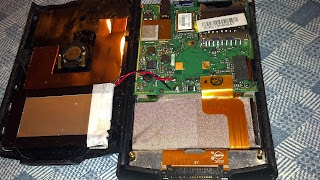 Hold the case and press lightly against the screen and the whole assembly will pop out easily. 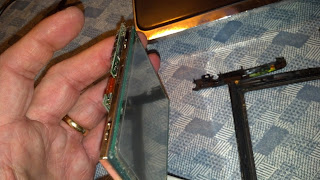 The motherboard is sticky and lightly glued to the screen.  Pry it off with minimal effort.  Since the connectors are loose the mobo will come off. 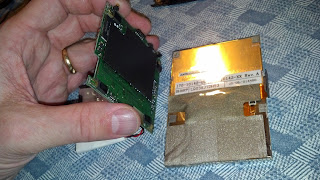 Here is a screenshot of the part number for the screen on the back of the display, under the motherboard. 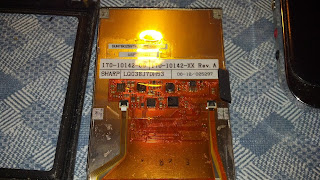 Stick down the motherboard to the new display (in my case it was scrounged from another palm tx).   Fold the screen and keyboard connectors down and press them to reconnect.   Put the top power switch piece in and press the case back together.  Put the screws back in. 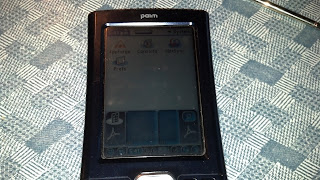 There was one problem that took a few minutes to figure out.  The palm kept resetting itself over and over again after a few touchpad presses.  At first I thought I had a loose connector but the problem turned out to be that the screen merely needed to be recalibrated.  Enter the system->touchpad->calibration menu and perform the clicks.  That solved the problem.  I think that the Palm resets if it gets a touch outside the expected area, which happens if the new touchpad is not calibrated.

This turns out to be one of the easiest screen repairs I've done.   I think anybody could do it.  Worst part is the non standard screws on the back.  No glue or heat guns, only four screws, and easy connectors.   The only trick is to be sure to calibrate the new screen.