This summer I went swimming at the beach. Played in the waves about half and hour. At one point I realized my Samsung Galaxy S4, less than a year old, was in my pocket. Nooooooooooo! I didn't think I had it with me, but I'm so used to carrying it that it has become invisible. It was inside a huge rubbery Otterbox Defender case.   Thank goodness I didn't lose it, I would have gone nuts combing the beach for it.

On the outside the phone looked fine. I immediately popped off the back and took out the battery. I had no tools with me on vacation so I couldn't do much more. I dried it out with a paper towel and put it in a bag of rice and left it. It had a few drops of water inside around the battery but didn't look too bad. Between the case and the phone, it seems pretty tight. Maybe it will be OK? Some people suggested I should rinse it with fresh water to get the salt water out, but that seemed like I'd be destroying it more, when it didn't seem terribly wet inside. 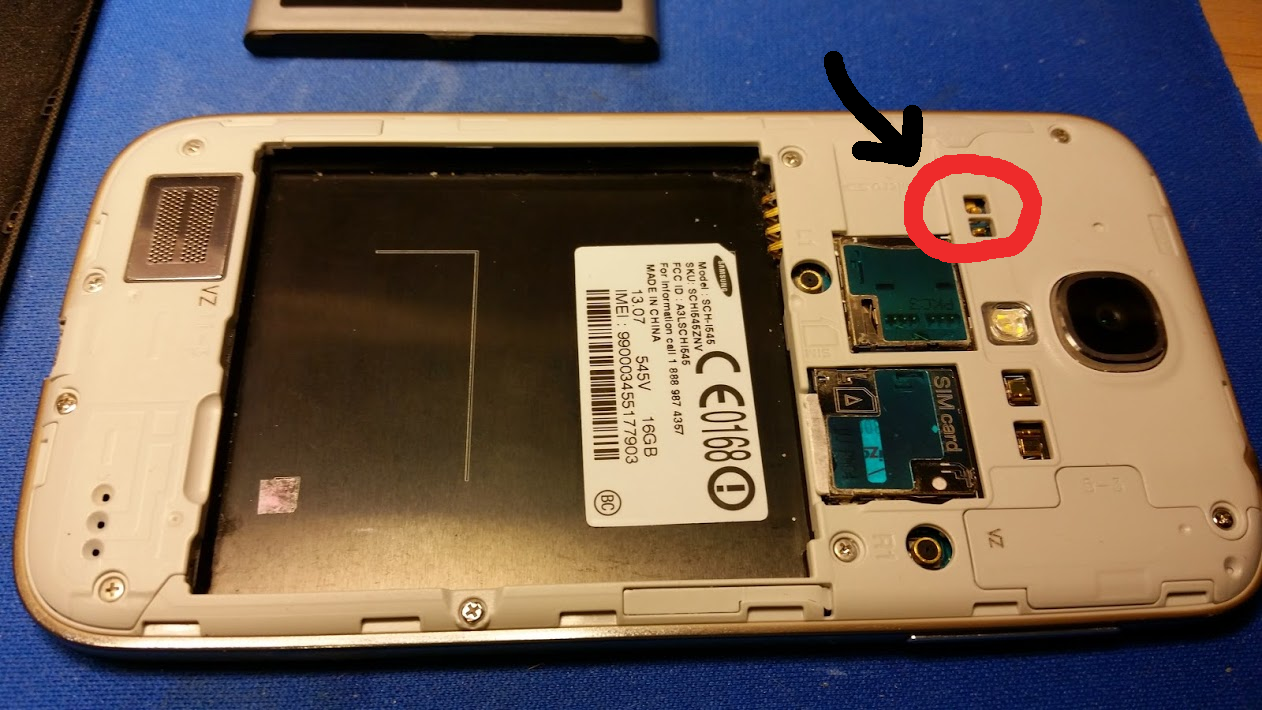 A voltmeter on the terminals circled in the picture yields 1.8V when the phone is plugged in, and goes away when it is unplugged.  This is the input for the wireless charging.  This gives me some hope that the phone is not a brick.  But it still doesn't power up.

I'm out of state with no phone and no tools.   I need a phone to live, so I sucked it up and went to the local Best Buy and used an upgrade to replace it with a slight newer Samsung Galaxy S5.  Ended up costing $100 and two more years.  But at least the pain of stupidity faded a bit with a shiny new phone.   Now I was free to try some more extreme measures to fix the phone.

When I get home two days later, and have my tools I open it up.  The phone has been in rice the whole time.

Standard youtube video shows you how to open it.  It is surprisingly easy for a phone to get apart.  Once the screws are out, I used my fingernail. 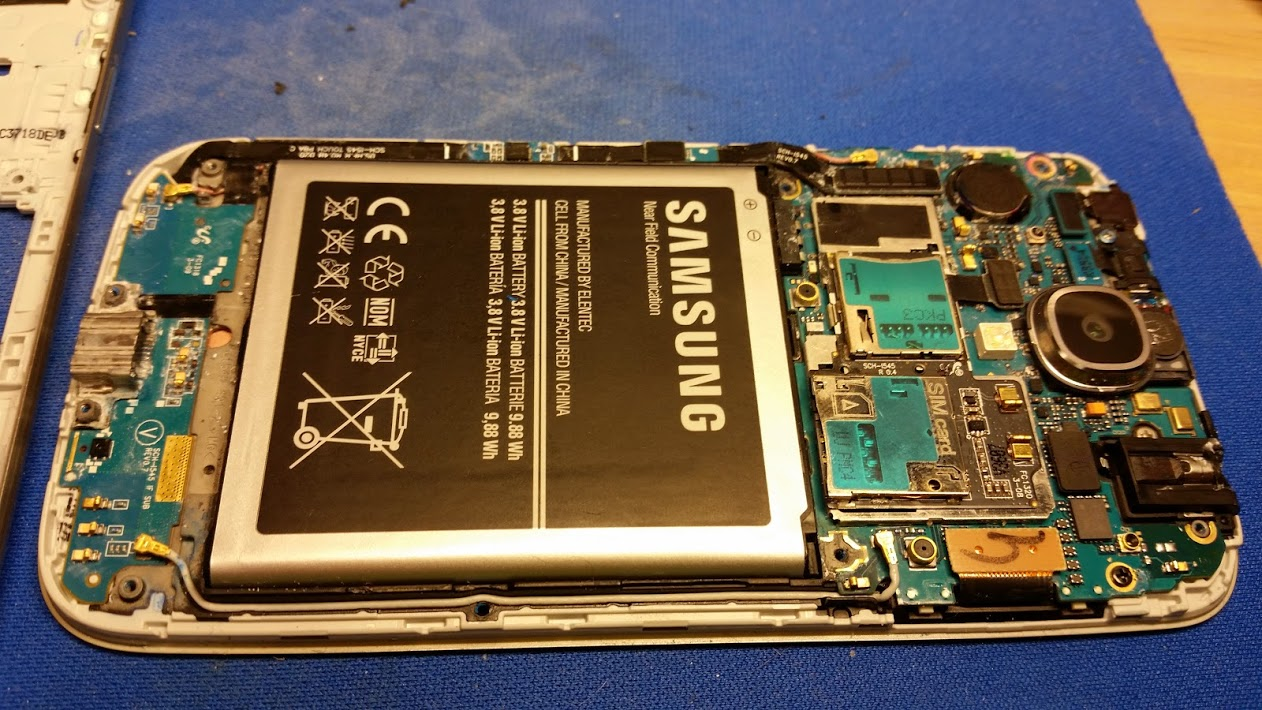 Things look OK at first glance, but close inspection and YUCK!  Maybe you can't see from the pictures but it looks like a friggin salt mine.  Salt is conductive and if it is not corroded, it is probably shorted in all kinds of places. 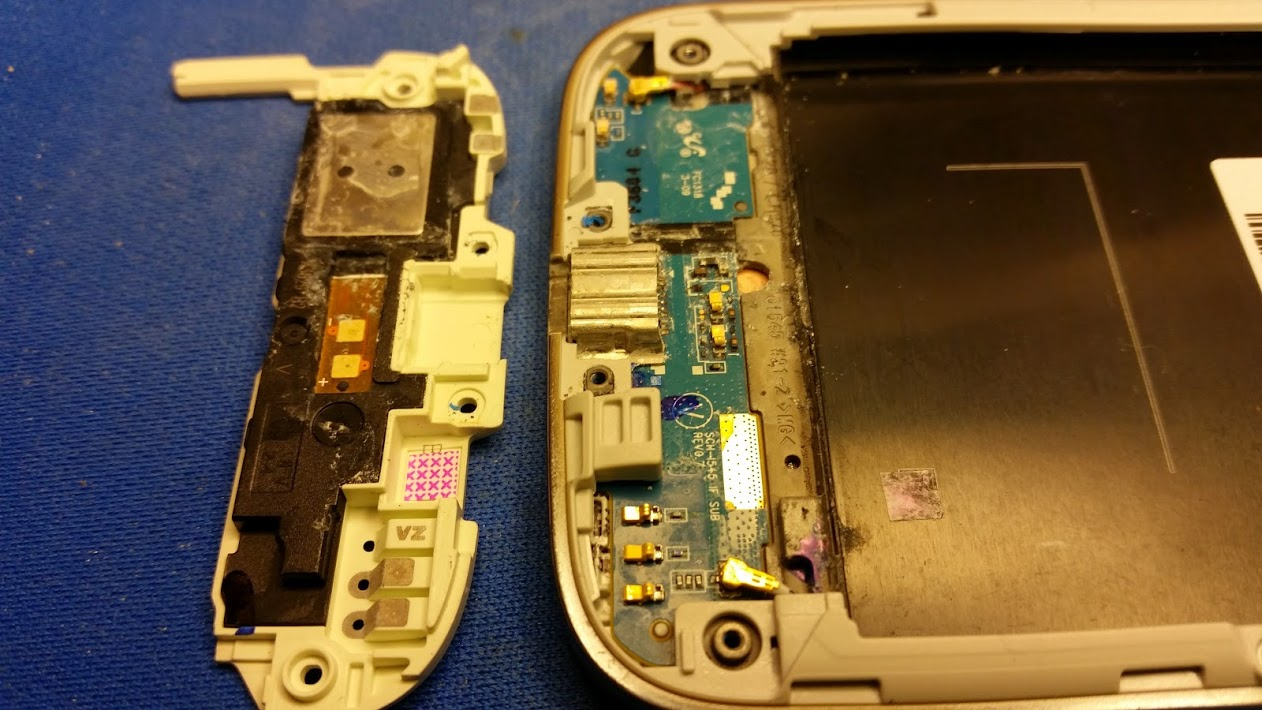 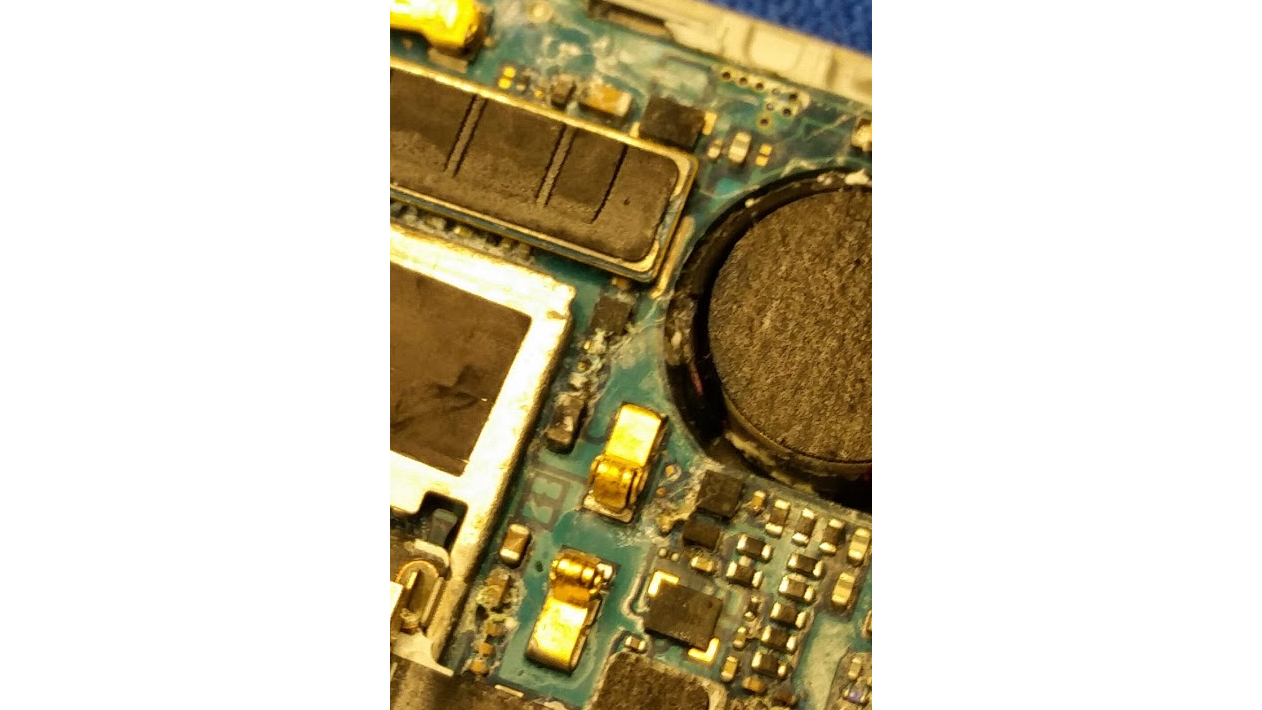 There is salt everywhere, caked on the components.   I popped out the motherboard by lifting the connectors and rinsed it in alcohol.  I poured alcohol all over the exposed boards.  Wiped what I could and let it evaporate.   Once it dries it looks better, but there is still salt caked everywhere.  Can't figure out how to make it better.

I re-assmbled and plugged it in.  Still nothing.  Totally dead.  This phone may be a lost cause.
I'll add more if I think of a way to clean it better.   Maybe a fresh water bath will dissolve it better than water.

At this point a week has passed since it got submerged in salt water.  In hindsight I should have done this immediately.   The damage may have already been done.  I just didn't have the nerve.

I can't believe I did this, it felt so wrong!   I disassembled the phone and gave it a bath in fresh water.   I took off the cover and removed the connectors to the motherboard so that water could get underneath.  I did not totally take it apart. I rinsed the boards each a couple times and changed the water a couple times to get the salt off.  Never have I treated electronics this way! 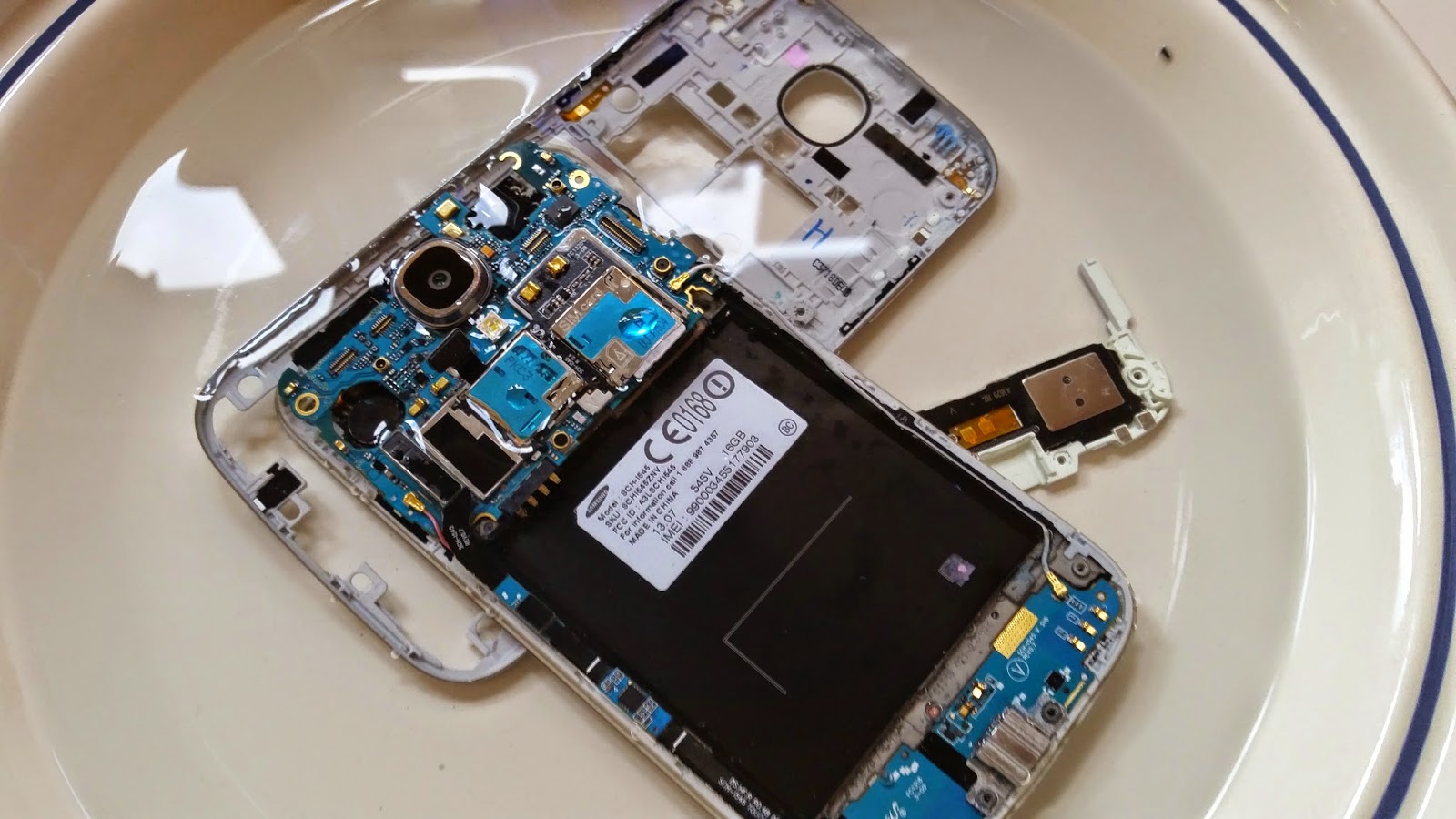 Back in the rice while still disassembled.  I will let it sit for a day and dry out. 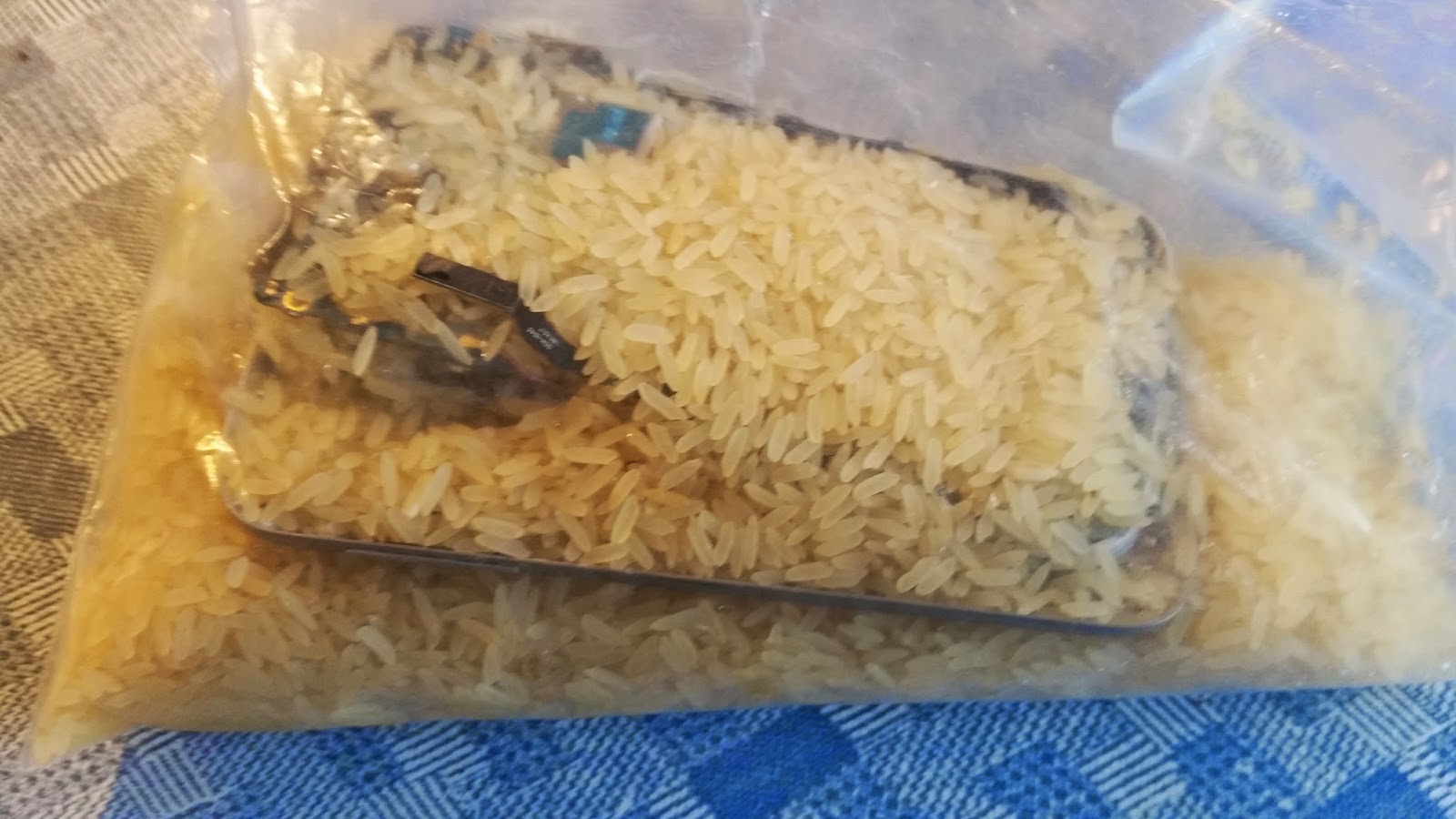 After it dried out I looked at it, and it is still full of salt.  This photo is bad but you can see salt caked around between the components. 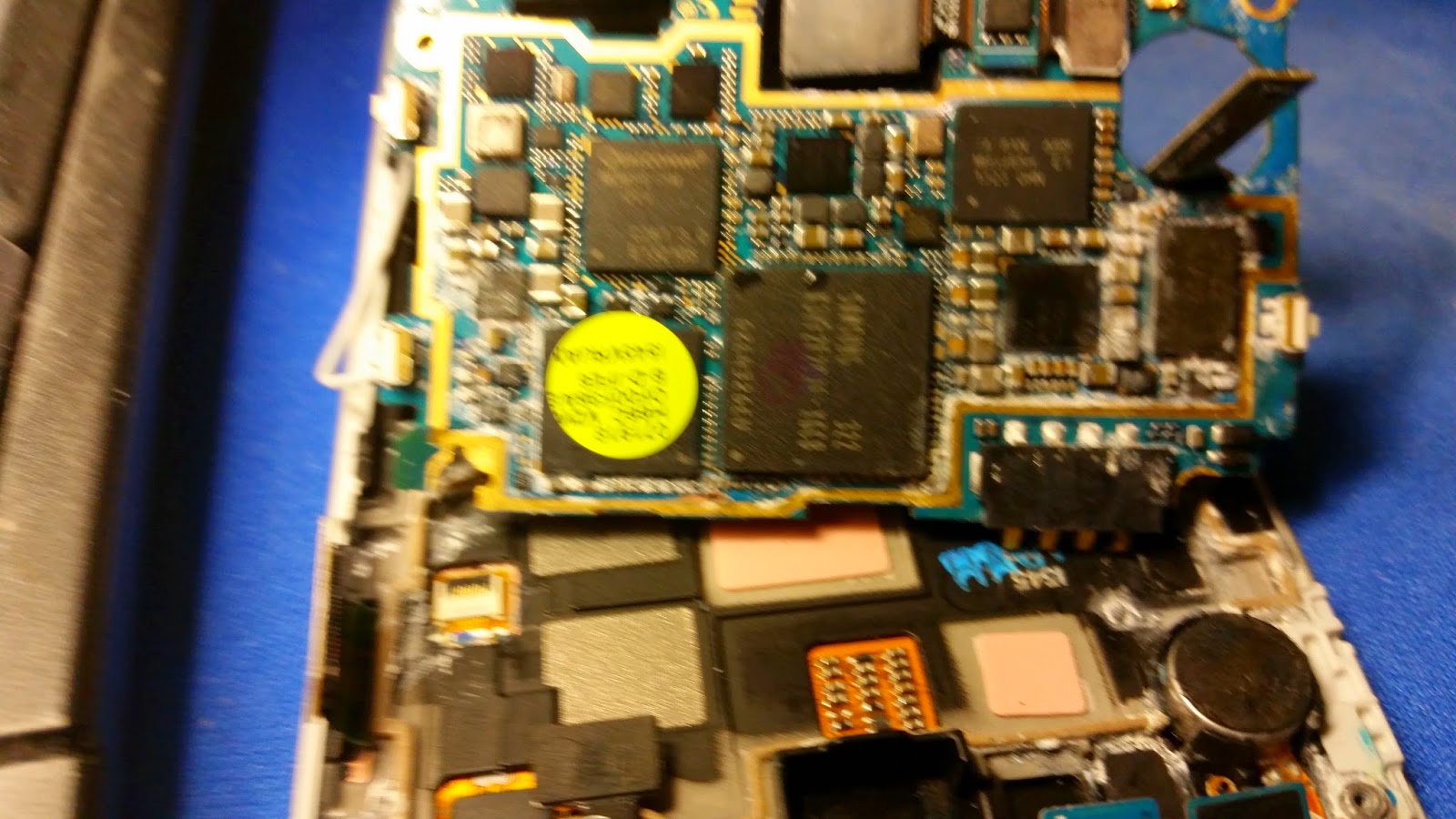 I put the phone under running warm water for 10 minutes, and back into the rice.  Not looking good.

After the phone dryed, the boards don't look much better.  There is still salt caked in between the components.   Dang.   This needs some aggressive cleaning.

Strangely there is some minor improvement.  The terminals on the back of the phone circled above, now read 5V instead of 1.8V!!  So I have removed some of the shorting material.   However the phone is still totally DOA and won't turn on and no LEDs light.  I'll try charging for a bit but I should see a charging screen even with a dead battery.

Stay tuned.. but if this happens to you, don't expect to ever use your phone again  :).

Posted by siliconfish at 9:08 AM