I made a more permanent version of the RFID tag reader:

It took some staring at the cryptic documentation and the web site below to figure out the circuit, so I drew it up, since the drawings elsewhere were awful and had errors.

Thanks to http://hcgilje.wordpress.com/resources/rfid_id12_tagreader/ for the head start.
Photo of the Arduino with the proto shield stacked on top.  The RFID module is soldered to a breakout board which is in turn soldered to the prototype shield.  Indicator LEDs are installed sticking up high so they will poke out of the box when done. 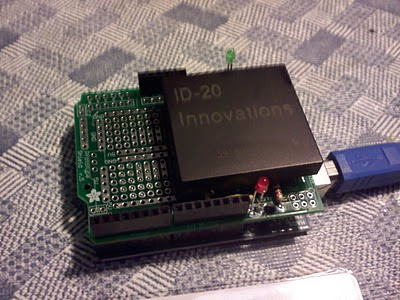 The unit placed inside the bottom half of the Sparkfun project box. This box fits an Arduino perfectly.  If I had the project to do over again, I'd have put the RFID module on the other end of the prototype board so it was centered in the box.  I built the unit while i was waiting for the box to come, and didn't plan this ahead properly.  I was thinking I might put a small LCD readout on the end of the prototype board, that is why I did it this way.  In the end the LCD wasn't really useful and I deleted it. 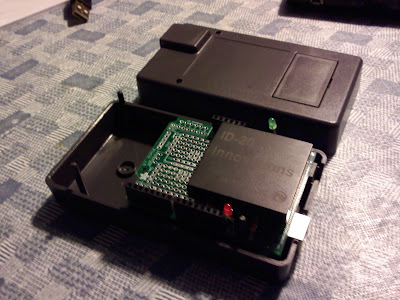 All buttoned up with the holes for the red and green LEDs drilled. 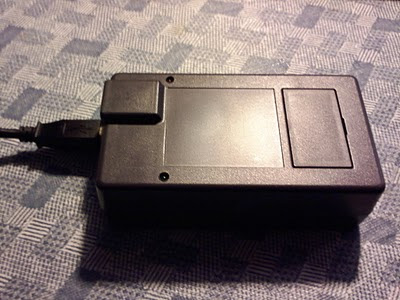 I'm going to repeat information in the previous post on the prototype version, so the writeup is all in one place.

The RFID module reads out serial ASCII data, and all you have to do is connect that output to a pin on the Arduino.  You use the SoftwareSerial library to be able to define any pin as a serial input.  Otherwise you have to use the TX/RX pins, and that interferes with serial communication to the computer.  Set the RFID reader serial speed to 9600 baud.  Other speeds i found spewed garbage.
The sketch looks for codes and compares them to a valid list.  I can't imagine anyone could pull the compiled code off the microcontroller to see the list of valid tags.  Plus the RFID reader has a good 5 inches of range, so you can put the reader INSIDE the door if you want.  It even reads from the back of the RFID module.


I found the reader only reads the tags from Sparkfun.  It does not read HID tags (at least the ones I have), it does not read pet chips, or Metro smartcards.  I was disappointed as a hacker, but the project still works great.
You could add a data logger or an ethernet shield if you want to save a record of what tags were read or send that information across the internet.

This was much cheaper, so i ended up getting this instead.  It is really for autos but worked fine.